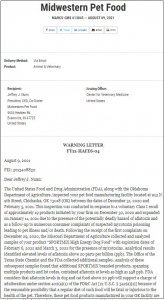 On August 9, 2021, the FDA issued a corporate-wide Warning Letter to Midwestern Pet Foods, Inc. after inspections of the company’s manufacturing sites revealed apparent violations of the Federal Food, Drug, and Cosmetic Act across all sites. According to the FDA, these conditions likely contributed to the illnesses or deaths of hundreds of dogs.

The initial inspection of Midwestern’s Chickasha, Oklahoma plant was triggered by reports of illnesses or deaths in dogs that had eaten SPORTMiX brand dry dog food manufactured by Midwestern. Samples of SPORTMiX were later found to contain levels of aflatoxin as high as 558 parts per billion (ppb). The FDA considers pet food to be adulterated if it contains more than 20 ppb of aflatoxin.

In January 2021, the company voluntarily recalled these products, as well as all corn-containing pet foods manufactured at its Chickasha plant. In March, Midwestern recalled several brands of pet food manufactured at its Monmouth, Illinois plant after samples tested positive for Salmonella. The FDA found that Midwestern’s food safety program appears inadequate to significantly minimize or prevent Salmonella in its pet food. None of the recalled products should be available to consumers to purchase.

“The FDA is dedicated to taking all steps possible to help pet owners have confidence that the food they buy for their animal companions is safe and wholesome,” said Steven M. Solomon, MPH, DVM, director of the FDA’s Center for Veterinary Medicine. “We are issuing this corporate-wide warning letter because inspections of Midwestern Pet Foods, Inc.’s manufacturing plants revealed evidence of violations, which were shared across multiple plants and were associated with the illness or death of hundreds of pets who had eaten the company’s dry dog food. Samples of dog food were found to contain high levels of aflatoxin. It is imperative that manufacturers and distributors of pet foods understand their responsibility to comply with all requirements of federal law and FDA regulations and, when applicable, to implement a robust hazard analysis and risk-based preventive controls program. We’ll continue to hold companies accountable and protect animal health as a core element of the FDA’s public health mission.”

Aflatoxins are toxins produced by the mold Aspergillus flavus, which can grow on corn and other grains used as ingredients in pet food. At high levels, aflatoxins can cause illness and death in pets.

As of August 9, the FDA was aware of more than 130 pet deaths and more than 220 pet illnesses that may be linked to eating brands of pet food manufactured by Midwestern. Not all of these cases have been confirmed as aflatoxin poisoning through laboratory testing or veterinary record review. This count is approximate and may not reflect the total number of pets affected.

The FDA has requested a written response from the company within 15 working days stating the specific steps they have taken to correct any violations. Failure to adequately address any violations promptly may result in legal action, including product seizure and/or injunction.

Out of an abundance of caution, Nestlé Purina PetCare Company has voluntarily recalled a limited amount of Purina Pro Plan…
Read More

FOR IMMEDIATE RELEASE (View as PDF) For the second consecutive year, Bill Bookout, president and board chairman of the National…
Read More

Thanks to Sebastian Krawiec and Nutritional Outlook for interviewing Bill Bookout, and including the NASC perspective in their article “Cannabinoids…
Read More